The first quarter of 2022 has flown by for all of us here at Mondo. We’ve filled our weeks with brewing new beers, sales activations, event planning and so much more!

First things first, some team news. We need to officially welcome our newest members of the team who have joined in the past couple of months. Some of you may have already met Franklin, our Mondo Tap Manager. Franklin has had an incredible impact coming into Team Mondo with his big personality and bigger ideas. Also joining Mondo on the brew floor is the lovely Akito. Hailing from Japan, Akito can always be found with a smile on his face and is the perfect addition to the brewery team. We’re very grateful to have both Franklin and Akito on the team and look forward to seeing them progress in their respective roles.

We said farewell to the wonderful Tom who was our Ops Manager for the best part of 3 years. He’s moved on to pastures new and we’re looking forward to seeing what the universe has planned next for him! This means our office has had a bit of a reshuffle with Jake and Toni taking over ops and logistics. 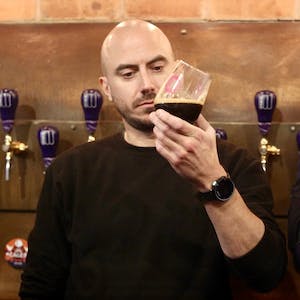 The start of the year has seen the release of a number of phenomenal seasonal beers. The brew team have been working tirelessly to bring you new and exciting releases that have all received an incredible response from customers. Eder, our Rotbier brewed in collaboration with long-time friends German Kraft, was an instant hit with its faint hints of sweet caramel and roasted cereal. The following release was our Altbier, Steve. Wrapped in a gorgeous William Morris-inspired artwork by our genius illustrator Luke Drozd, this seasonal has the classic crisp, dry finish you would expect from an Altbier.

Our last release in April is a very exciting one – Femme Fatale is our brand new 5.9% DDH IPA brewed and named by the women of Mondo. Made using the 5th Annual Pink Boots Hop Blend, to celebrate International Women’s Day. By purchasing the Pink Boots blend, a donation of $3 per lb was made to the Pink Boots Society Scholarship Fund. In addition, we will be donating a portion of the profits of Femme Fatale to the 280 Days Charity Fund – a charity focused on supporting pregnant women and newborns currently struggling in Ukraine.

Finally, we were very honoured to be invited to the International Brewing Awards ceremony to collect the three awards that we won. Founder Tom and one of the brewers, Marco, went down to Guildhall to pick up the Bronze Award for Machina, the Silver Award for Sun King and the Gold Award for Dennis Hopp’r.

The first few months of the year have set us up perfectly for the jam-packed months we have ahead of us. Team Mondo are going to be here, there and everywhere over the summer at various festivals across the country. Make sure you keep an eye out for updates so you don’t miss out on any of the Mondo fun!

monthly roundup
Start as you mean to go on.
The Summer We Won't Forget